Like many people during the Covid-19 outbreak, we’ve been inspired by the dedication and determination of the UK’s keyworkers, from our health care heroes in the NHS and social care, the police and armed forces but also the unsung heroes, the supermarket staff, the refuse and recycling, the transport and delivery network, the list goes on.

Individuals who run the gauntlet every day and risk their own health for the sake of others. We didn’t want to just stand by and watch as the pandemic unfolded, we wanted to do anything we could to help, and so we approached a number of national charities we work with to offer our services for free if it aided the fight against Covid-19.

Keep Britain Tidy was one of the charities that welcomed our offer. They were being inundated with requests from local authorities across the UK who were seeing huge spikes in fly tipping, littering of PPE and general littering in parks and green spaces.

A perfect storm of public services being overstretched, restricted access to recycling sites and a dramatic increase in the public taking walks and exercise was causing substantial problems for councils, it was also creating greater risks for their keyworkers having to deal with potentially contaminated litter.

Keep Britain Tidy asked if we could develop some creative ideas to help solve these issues for local authorities, it need to be executed and distributed fast. We took up the challenge and conceptualised three behaviour change campaigns to target the problems.

Deliverables for each campaign were quickly selected based on rapid distribution to the local authorities, we decided on a digital downloadable campaign pack of outdoor posters and digital social medias assets such as Twitter, Facebook, Instagram and website banners.

For the creative, the general thought was to be direct with messaging but also be emotive, tug at heart strings where possible. Fly-tipping, park littering and PPE littering has to be cleaned up by council key workers and diverting services away to do this puts other services and individuals at risk. 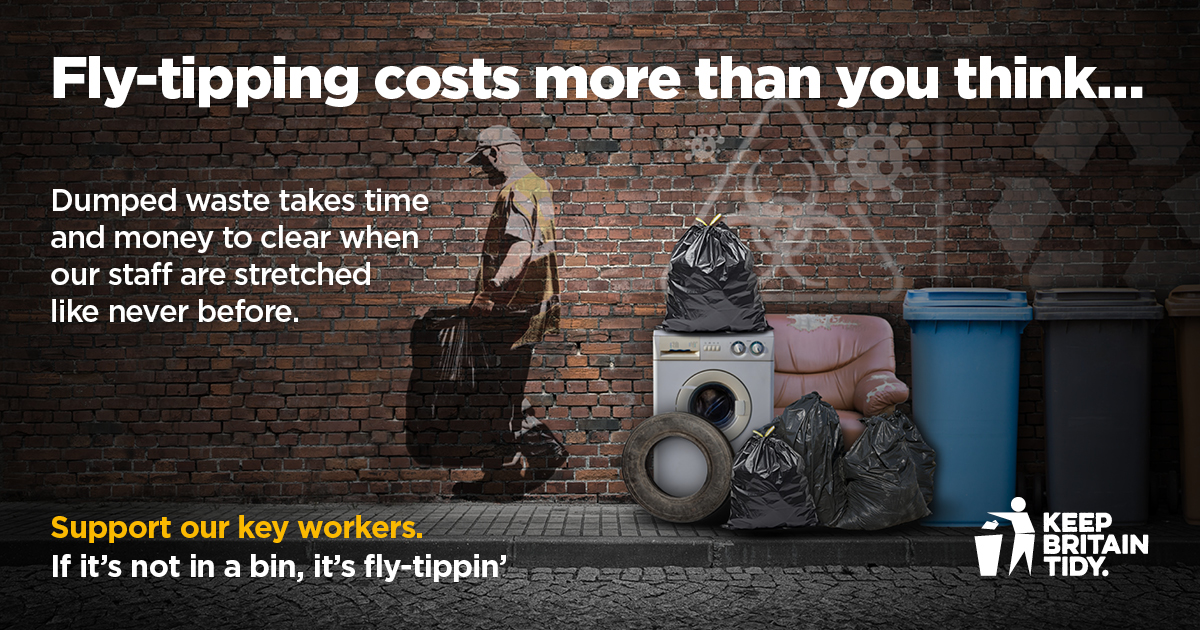 Fly-tipping cost more than you think

The Fly Tipping creative was our first of the three campaign projects, we visualised a refuse collector having to pick-up littered bags from the street, doubling his workload and putting him at additional risk of contracting Covid-19 due to extra handling. The audience for this campaign was urban and so we elected to create a Banksy style art directed image which we felt enhanced the sentiment of a ghostly unsung hero who’s services we often take for granted. 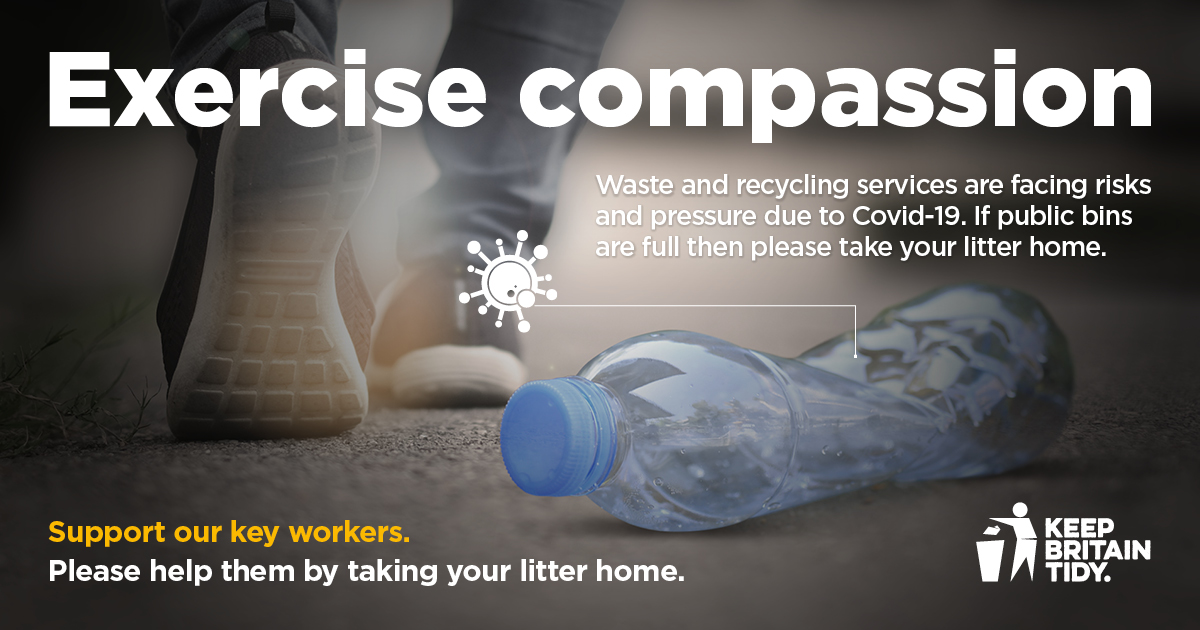 Our second campaign focused on reducing littering in parks, green spaces and walking routes. The surge in littering was due to increased public exercise activity and so plastic bottles, snack wrappers were the main littered items. We focused our messaging to ask the viewer to ‘exercise compassion’ alluding to the exercise activity whilst also asking the viewer to think before carelessly dropping litter. The art direction of the ad placed a discarded bottle on the floor in the wake of walker feet to emphasis the type of litter dropped whilst exercising. 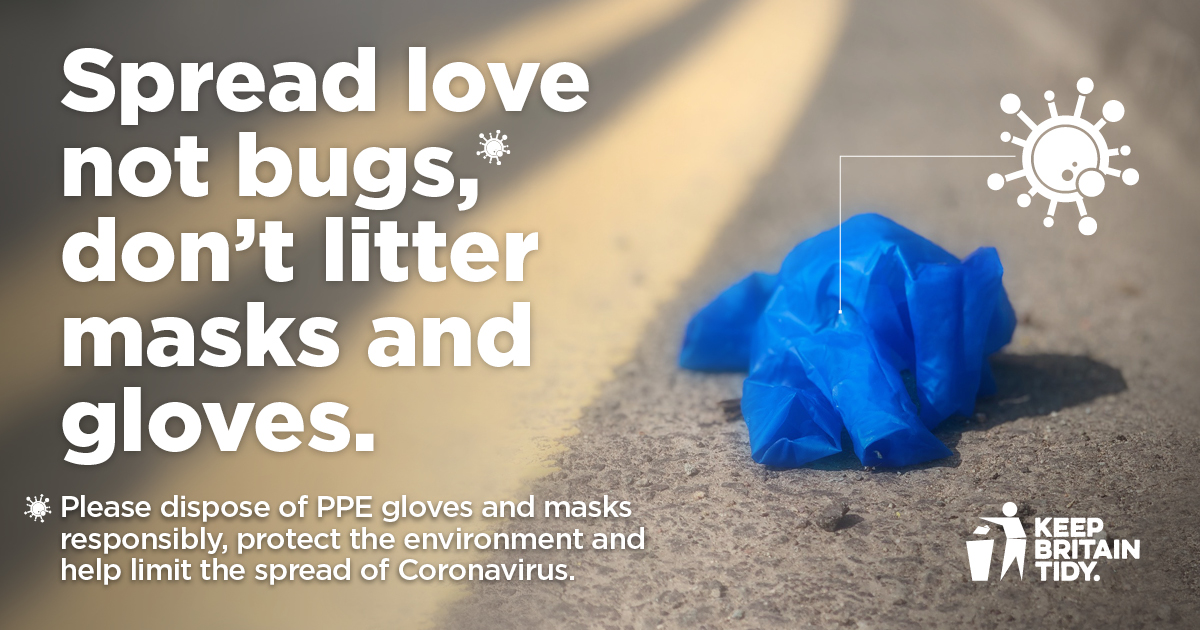 Carelessly discarded PPE was the subject of our final Covid-19 campaign, with the rise of people seeking to protect themselves and others with masks and gloves so too this invariably gets discarded on our streets. For our ad, we used emotive messaging and simple Instagram style photography to get the point across, highlighting that dropping PPE litter caries a high risk of spreading the Coronavirus infection.

As an ethics-based design and digital agency, creating campaigns that help change behaviours for the good of society is close to our hearts. We, ourselves, are not on the front line like so many key worker heroes, but hopefully we can use our skills to raise awareness to real issues that will benefit the lives of others.

We thoroughly enjoyed working with Keep Britain Tidy on the campaigns and seeing the councils putting them to good use via their own marketing channels.

“The suite of assets produced by Carbon Creative have been invaluable in supporting local authorities at this difficult time and helping to get the right messages out to the public to protect our environment and solve some of the problems that have emerged.”