Carbon Creative have had the pleasure of being involved in a new guerrilla marketing campaign with Keep Britain Tidy to highlight the effects that carelessly dumping your cigarette butts can have on the city.

Fifty giant cigarette butts descended outside Bank Tube Station today as part of a wider campaign for The City of London in order to raise awareness and promote behaviour change. The stunt sits alongside the successful ‘it’s no small problem’ campaign that is being delivered across several London boroughs.

Having worked on a wide range of projects for Keep Britain Tidy over the last two years, we were excited to get stuck into a new campaign for 2014 to encourage smokers to bin their butts and take pride in where they live. We also needed to get through to smokers that although cigarette butts may not seem like litter, six millions butts are dropped each year in the city and this plays a significant part in the £3.8 billion that it costs to clean our streets each year, as well as being a criminal offence.

As well as the giant cigarette butts, Carbon Creative produced bin stickers, beer matts and various signage to accompany the campaign as well as coming up with the initial creative.

The campaign is also supported by a video: https://www.youtube.com/watch?v=TpSWsMaof-g&app=desktop 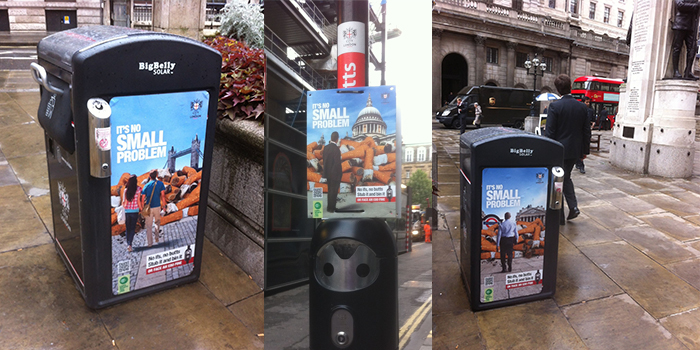 The campaign and in particular the giant butt stunt attracted lots of public attention and got a fantastic response on social media, with several high profile individuals and companies interacting with Keep Britain Tidy to show their support. The media filmed the stunt for a TV documentary and our giant cigarette butts caused so much of a stir that Keep Britain Tidy continued to take them on a journey around London and spread the word as much as they could.